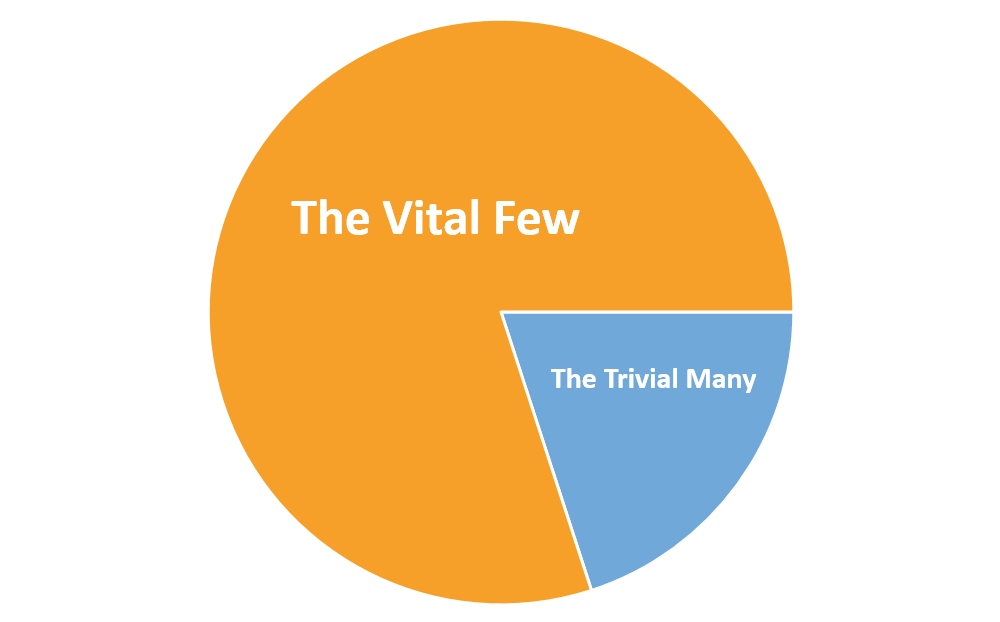 The Pareto principle (also known as the 80/20 rule) is the adage that in many situations, 80% of outcomes are derived from 20% of causes. For example, the Pareto principle could mean that, when it comes to movies, 20% of the films that are being shown in cinemas are responsible for 80% of the ticket sales.

The ‘outcomes’ and ’causes’ that the Pareto principle refers to are varied in nature, and depend on the situation at hand. For instance, ‘outcomes’ can refer to anything from financial profit, to customer complaints, to acquisition of knowledge, while ’causes’ can refer to anything from financial investments, to software features, to time spent working on certain tasks.

As such, the Pareto principle has been found to apply in a wide range of situations, and it has predictive value both when it comes to individuals, as well as when it comes to large groups.

Because this principle is so effective, and because it’s relatively easy to implement, it’s highly beneficial to understand how it works. As such, in the following article you will learn more about the Pareto principle, see examples of how it applies in various situations, and understand how you can use it yourself, as effectively as possible.

Examples of the Pareto principle

The best-known example of the Pareto principle is attributed to Vilfredo Pareto, the Italian economist after which this principle is named, who observed that 80% of the wealth in Italy is owned by 20% of the population.

Furthermore, there are many other situations where the Pareto principle applies. For example:

Scientific basis for the Pareto principle

The Pareto principle is based on the concept of power laws. Simply put, a power law is a type of functional relationship between two quantities, where a linear change in one quantity leads to an exponential change in the other quantity, meaning that one quantity varies in proportion with the power of another.

The Pareto principle suggests that in many situations, we can expect to find a Pareto distribution, which is a specific type of power-law distribution that contains a negative exponent, meaning that that as one quantity increases, another quantity decreases as a power of the initial quantity.

For example, a Pareto distribution could occur in the relationship between income level and number of earners, if by increasing the income level by 3, we expect 9 times fewer individuals to earn that much (i.e. 3^(-2), which is equal to 1/9).

This means, as we saw above, that as a certain outcome level (e.g. wealth) increases, the proportion of causes (e.g. people) responsible for it decreases. This concept applies to a variety of real-world variables, beyond the ones we saw so far. For example:

This concept can be illustrated using the following graph:

Note: from a mathematical perspective, there is more complexity to the concept of power laws and Pareto distributions beyond what is included in this article. However, the vast majority of this information isn’t important to understand from a practical perspective.

The Pareto principle refers to a specific, common type of Pareto distribution, where 80% of the outcomes come from 20% of the causes.

As such, the exact distribution doesn’t matter when it comes to implementing the Pareto principle. Rather, the important thing to remember is that a small portion of the causes will generally be responsible for a large portion of the outcomes, whether that small portion is 20%, 30%, 10%, or any similar quantity.

A concept that is related to the Pareto principle is Zipf’s law, which also involves a power-law distribution, and which states that in certain samples, the frequency of an item is inversely proportional to its rank among other items of the same type.

For example, Zipf’s law means that in a large, random sample of written or spoken words, the frequency of any word is expected to be inversely proportional to its rank in the words’ frequency table. Essentially, this means that the top few most popular words in the sample (which in English are words like “the” and “a”), are expected to account for the majority of the word-tokens which appear in the sample.

How to implement the Pareto Principle

The main goal of the Pareto principle is to help you concentrate your efforts as efficiently as possible, by focusing on the small proportion of causes that are responsible for a large proportion of outcomes.

This means, first of all, that you should focus your efforts on the 20% of the work that leads to 80% of the positive outcomes. For example:

In addition, this also means that you should find a way to handle or eliminate the 20% of issues that are responsible for 80% of your negative outcomes. For example:

In certain cases, what you should when this happens is relatively clear-cut. For example, if 20% of the material that you have to study will account for 80% of the questions on the exam, then you will need to understand this material even if it causes 80% of your issues.

However, there are some situations in which the optimal course of action isn’t clear. For example, if 20% of the customers generate 80% of your revenue but also 80% of your complaints, then you will have to consider your priorities before deciding how to act.

Things to keep in mind while implementing the Pareto principle

There are some things that you should keep in mind when implementing the Pareto principle:

In addition, if you’re engaging in a long-term process, make sure to reevaluate your situation periodically, and adjust according to the Pareto principle each time, as the distribution between the relevant causes and outcomes may shift over time.

Finally, as with any other guiding principle, when applying the Pareto principle you should make sure to use common sense, and take into consideration any additional factors that might be important, beyond the cause-outcome relationship. For example, this means if you offer a software service, and you’re trying to decide which bugs to fix based on how many users reported them, you will likely want to fix a serious bug that can cause critical security issues, even if only a single user noticed it.