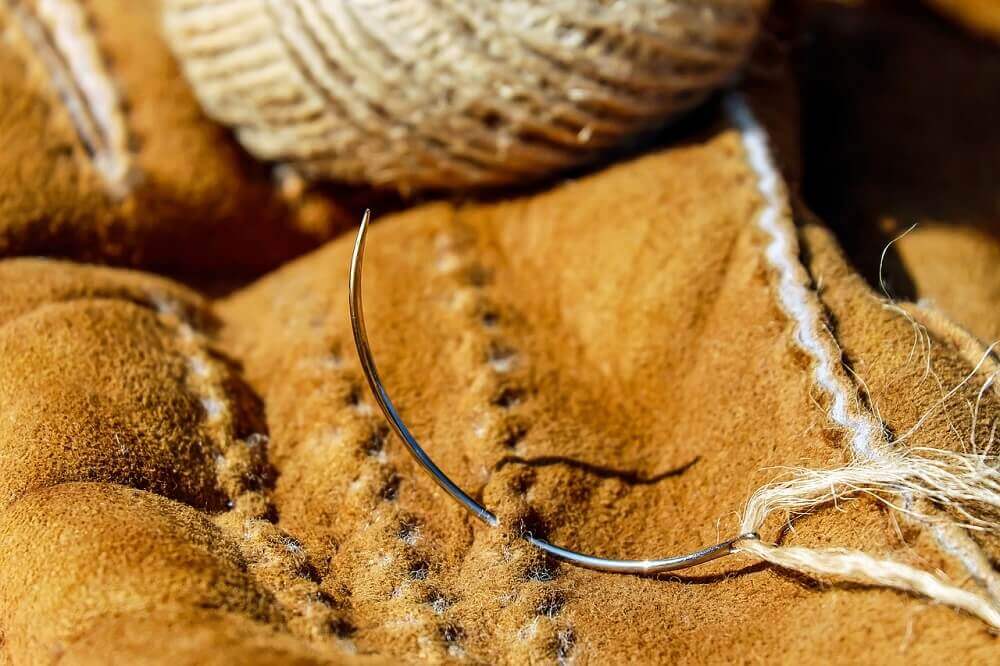 Sooner or later, the things that you use start falling apart. Clothes are no exceptions, and eventually they start to tear, split at the seams, lose buttons, or suffer from other minor forms of damage.

When this happens, a lot of people tend to just throw the item away. However, in most cases you can easily fix the issue with some basic sewing. This allows you to significantly extend the shelf-life of the items, which saves you time, money, and can also help you in situations where you can’t immediately replace the item in question.

This isn’t a guide for people who want to master the art of sewing intricate patterns. Rather, this guide is for people who want to learn, in about 5 minutes, how they can sew and fix stuff that gets damaged. This guide isn’t limited to fixing clothes, and can also help with other items, including anything from backpacks to pillowcases. If you want to learn this simple but useful skill, read on.

Items you will need

Sewing needle- the bigger the eye, the easier it will be to thread it. Overall though, size shouldn’t really matter unless it’s so small that you can’t thread it at all, or so large that it makes holes in whatever you’re trying to sew.

Scissors/knife- designated sewing scissors/shears are best, but anything that can cut the thread will work. Don’t use your teeth: it’s bad for them, and they do a bad job at this anyway. Besides, finding something to cut with isn’t that hard.

Pins (optional)- these can be used to hold the fabric in place while you’re sewing. Not crucial in most cases, but useful in some.

Small tip on getting sewing supplies

A lot of hotels give out, for free, small sewing-kits which contain all of these items (except for scissors). You can stock up on a few extra kits whenever you stay in a hotel.

In fact, you could generally just walk into a hotel and ask for a sewing kit, and you’ll probably get it without any questions asked.

You can also ask them for a disposable razor, and add its blade to your mini sewing kit (after carefully removing it), to ensure you always have something to cut with (though it’s not a very convenient tool to use).

It’s worth it to keep a spare sewing kit in your bag. It barely takes up any space, and you never know when you need it. People almost never think of carrying something like this, so not only is it convenient, but you could also end up saving the day for someone with an unfortunate clothing malfunction.

Setting up the materials

First, you’re going to have to cut the thread to the desired length. A rough estimate is to cut thread about 6 times longer than the length of the stitch you’ll make. When in doubt go with more thread, since you can always trim the excess if necessary (try not to overdo it though).

Now that you have everything ready, you can start sewing. All stitches generally revolve around the same concept, of pushing the needle across two parts of the fabric, in order to connect them.

The following 3 commonly-used stitches are usually your best bet:

Running stitch- place the two pieces of fabric you’re going to sew over each other to create some overlap. Sew in a straight line from the start of the overlapping section, while passing the needle up and down through the fabric. If you want the stitch to not show too much, you can alternate in terms of how much of the stitch appears on each side of the fabric.

Backstitch- this one is the same as a running stitch, with one change: you produce a full stitch going forward on the bottom side of the fabric, and then a half-length stitch going backward on the top side.

If that doesn’t make sense, try looking at the following diagram. The odd numbers show when the needle is pulled up from below the fabric toward you, while the even numbers show when it’s being pushed down away from you.

Whipstitch- usable mainly when sewing edges of a fabric together. Simply align the two edges, and perform a spiral sewing motion through them.

(Variants of this are also referred to as an overlap stitch, but for our purposes the distinction isn’t important).

Things to keep in mind:

The guidelines above are intended to provide you with the basic knowledge that can be used to fix the majority of items.

However, if you need to fix something that requires additional, specialized knowledge, simply search online for a further explanation on how to fix it. This can be helpful for example if you’re looking to learn how to darn a sock, or how to fix a button that fell. Feel free to improvise a bit, as these guides sometimes lean toward the overly-complex side. This is especially true if you’re mostly interested mostly in ensuring that you have a strong stitch, and don’t care too much about how it looks.

The most important thing to remember is that most sewing fixes are pretty straightforward and easy, so don’t be afraid to try and sew things instead of just throwing them away.