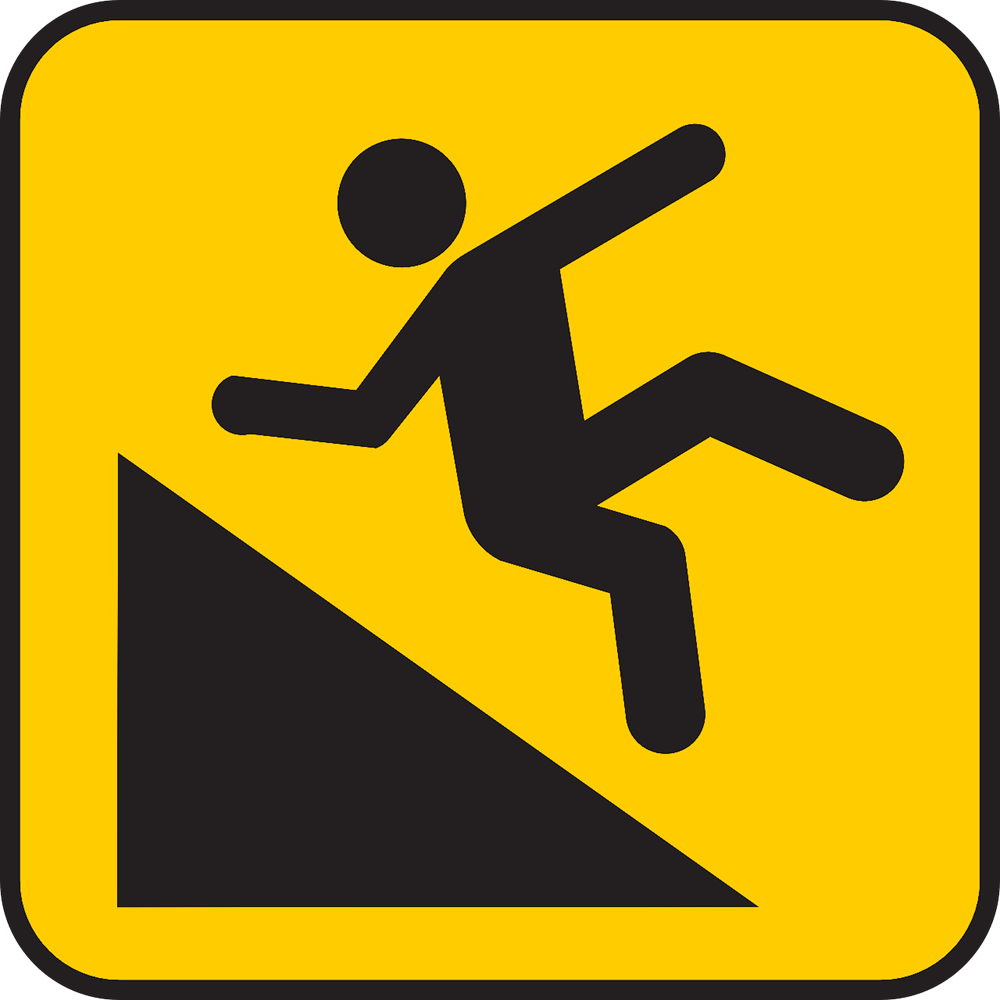 A slippery slope is an argument that suggests that a certain initial action could lead to a chain of events with a relatively extreme result, or that if we treat one case a certain way then we will have to treat more extreme cases the same way too. For example, a slippery slope argument could involve saying that if we allow a relatively minor event to take place now, then a major and tragic event will happen in the near future as a result.

It’s important to understand slippery slopes, since they play a role in many situations, both in people’s internal reasoning process as well as in debates on various topics. As such, in the following article you will learn more about the various types of slippery slopes, understand when they’re fallacious and when they’re reasonable, and see how you can properly respond to people who use them.

“If we allow voluntary assisted suicide for terminal patients now, then in a few years it will become a commonplace way to get rid of unwanted people in order to reduce medical costs.”

Slippery slopes arguments are also frequently used in the legal context. For example:

Slippery slope arguments are also frequently used in politics, and especially by traditionalists, who oppose change and who want to argue against it in the media or in the legislative context. For example:

“If we increase the number of immigrants that we let into the country, we will eventually end up letting in anyone who wants to immigrate, and then the whole country will be destroyed.”

There are three main types of slippery slopes:

In the sections below, we will explore each of these types of slippery slopes in more detail.

A causal slippery slope is an argument that suggests that undertaking an initial action will lead to a chain of events that will culminate in a dramatic outcome. For example, a causal slippery slope could involve arguing that if we help students who struggle by providing them with extra tutoring, then eventually we will simply give perfect grades to all students regardless if they put in any effort or not.

As such, the basic structure of a causal slippery slope is the following:

“If we allow [minor event] to happen now, then [another minor event] might happen later, leading to [a medium event], and finally to the possibility that [major event] will occur.”

These slopes often involve a positive-feedback mechanism, where the initial action in question will set off a chain reaction that reinforces itself. This potential feedback mechanism can be mentioned explicitly by the person proposing the slope, or it can be an implicit part of their argument.

The basic structure of a precedential slippery slope is:

As such, the precedential slippery slopes are based on the need to treat similar cases in a consistent manner.

Note: the precedential slippery slope is sometimes also referred to as the fallacy of slippery precedents, in cases where its use is fallacious.

A conceptual slippery slope is an argument that suggests that if it’s possible to transition between two things using a series of small, nearly indistinguishable steps, then there is no meaningful difference between those two things, and they must be treated the exact same way. For example, a conceptual slippery slope could involve arguing that if we allow euthanasia for animals, then there is no reason why we shouldn’t also allow it for people.

As such, the basic structure of a conceptual slippery slope is:

“Since it’s possible to get from [first thing] to [second thing] through a series of small steps, there is no valid way to draw a distinction between them.”

This argument is based on the concept of vagueness and on the sorites paradox (also known as the paradox of the heap). This paradox revolves around the fact that removing a single grain of sand from a heap of sand doesn’t turn it into a non-heap, but that, at the same time, a single remaining grain of sand won’t be considered a heap, which means that at some point, the act of removing sand turned the heap into a non-heap, despite the fact that there is no clear line of demarcation between the two. Accordingly, this type of slippery slope argument often uses language such as “where do you draw the line?”.

Furthermore, this type of slippery slope often involves gradualism or incrementalism, where people’s commitment to a certain concept or course of action is tied to a series of small, closely related steps. Specifically, this occurs when the slippery slope argument suggests that if you take an initial step, then there is no reason for you not to accept the next step, and the one after that, until you reach the final step, which is usually highly negative. As such, such arguments pressure you to either give up on your initial commitment, or to demonstrate that there is an inconsistency in your commitments.

Slippery slope arguments are often fallacious, though the reasons why they are fallacious can vary, and depend on the type of slippery slope which is being used.

When it comes to causal slippery slopes, a proposed slope is generally fallacious because it ignores or understates the uncertainty involved with getting from the start-point of the slope to its end-point.

This can happen, for instance, if the argument that presents the slope fails to acknowledge the fact that there’s only a small likelihood that the initial action being discussed will lead to the final event being predicted in the slope.

For example, consider the following formulation of a causal slippery slope:

When it comes to precedential slippery slopes, a proposed slope is generally fallacious because it ignores our ability to treat future cases differently than present cases, despite the precedent that the present cases set.

In this regard, precedential slippery slopes generally involve a false dichotomy, where only two options are presented (either refuse to set a certain precedent or set it and be forced us to treat other cases similarly in the future), while ignoring a third possibility, and namely the fact that we can set a precedent now, and still be able to treat other cases in a different manner in the future.

For example, consider the following formulation of a precedential slippery slope :

When it comes to conceptual slippery slopes, a proposed slope is generally fallacious because it ignores the ability to differentiate between two things even if it’s possible to transition from one of them to the other using a series of small steps.

For example, consider the following formulation of a conceptual slippery slope :

“If you think that we should treat [relatively mild thing] this way, then you can’t justify not treating [related, relatively negative thing] the same way.”

This slippery slope can be fallacious if it’s possible for us to find a way to justify treating the [relatively negative thing] differently then we do the [relatively mild thing], despite the similarities between them, since the argument fails to properly acknowledge this possibility.

“If we allow people to leave fires unattended anywhere in the forest, we will likely end up with a forest fire on our hands sometime in the future.”

This slippery slope argument suggests that if we allow something relatively minor to happen now (people leaving fires unattended anywhere in the forest), then a relatively major negative event will likely happen in the future (a forest fire), which is a reasonable stance to take in this case.

For example, when it comes to a causal slippery slope, the probability that the initial event will lead to the end event should be taken into account, since the more likely the end result is to occur, the stronger the slippery slope argument is. Accordingly, when slippery slopes are predictive in nature, their validity can be based on an assessment of the empirical evidence on the topic.

However, it’s important to note that this assessment will often be somewhat subjective, which means that even though it’s possible to quantify, to a degree, the likelihood of a certain chain of events, there is no definitive way to determine at what point this likelihood is so low that the argument in its favor becomes fallacious.

Slippery slope arguments that are used in this manner often involve extreme exaggeration, which evokes powerful emotions. Accordingly, slippery slopes are often combined with appeals to emotion, usually with the goal of appealing to negative emotions, such as fear or hate, but sometimes with the goal of appealing to positive emotions, such as hope or compassion.

In general, slippery slopes are primarily associated with negative events, and as such, slippery slope arguments are frequently used as a fear-mongering technique. As part of this, slippery slope arguments often include a parade of horribles, which is a rhetorical device that involves mentioning a number of highly negative outcomes that will occur as a result of the initial event in question. Such arguments tend to follow specific patterns, such as saying that if a certain act is allowed in the present, then it will eventually lead to behavior that is similar to that of the Nazis.

How to respond to slippery slope arguments

There are various approaches that you can use when responding to a slippery slope argument:

You can use any combination of these approaches that you think will work well. When you do this, keep in mind that the effectiveness of each approach will vary based on a number of factors, such as the type of slippery slope which was used, the context in which it appeared, and the audience it was presented to.

In addition, another important thing to keep in mind when responding to a slippery slope is that slippery slope arguments are not inherently fallacious. As such, before attacking such an argument, you should make sure that it’s indeed fallacious. When in doubt, start by applying the principle of charity, and assume that the argument is not fallacious, as long as it’s reasonable for you to do so. If possible, ask the person who presented the slippery slope to explain their reasoning, which can be beneficial whether the slippery slope in question is fallacious or not.