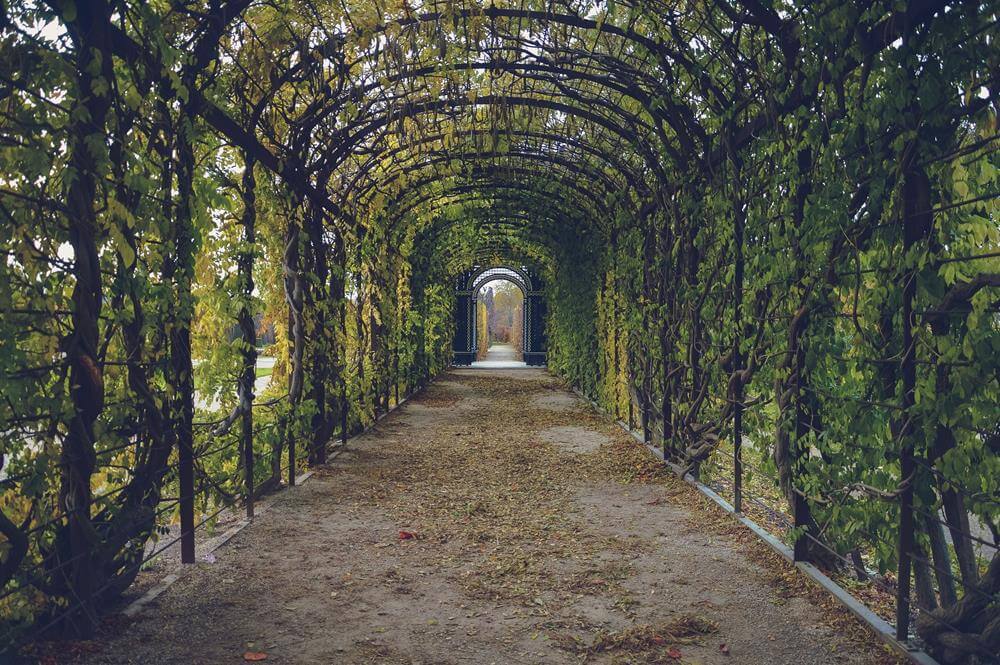 A garden path sentence is a sentence with an ambiguous part, that leads the reader to initially assume a certain interpretation for the sentence, until they reach a point where the ambiguity is resolved and this initial interpretation is shown to be wrong.

Essentially, when you read a garden path sentence, you encounter an ambiguous part that has multiple possible interpretations, one of which is significantly more likely to be true than the others, which causes you to select that interpretation for the information that you’ve read so far. However, as you continue reading, you suddenly realize that this initial interpretation isn’t valid, since it would cause the sentence to be ungrammatical. This forces you to re-process the sentence, in order to identify its correct interpretation.

This sentence is a garden path sentence because, when a reader begins reading it, they generally start by assuming that “raced” is an active verb. However, once the reader reaches the word “fell”, they realize that “raced” cannot be active, otherwise the sentence would be ungrammatical (since the verb “fell” wouldn’t have a subject). The reader then has to reprocess the sentence, before they are able to identify the correct interpretation for it, where the verb “raced” is passive.

People sometimes use garden path sentences in their writing without being aware that they’re doing so, which can lead to issues for readers. As such, in the following article you will learn more about garden path sentences, and see how you can avoid them in your writing.

Garden path sentences contain an initial ambiguity, in the form of a word or group of words that can be interpreted in more than one way.

Accordingly, from a psycholinguistic perspective, garden path sentences are sentences in which a certain syntactic structure is initially assigned to an ambiguous portion of a sentence, but is eventually discovered to be syntactically inconsistent with later parts of the sentence. This issue occurs because readers generally attempt to understand sentences as they read them, rather than waiting until the end, and it means that, once the initial interpretation is shown to be wrong, readers must re-process the sentence and assign the less-preferred interpretation to the initially ambiguous portion.

To understand how this works, consider the following example of a garden path sentence:

“After Bill drank the water proved to be poisoned.”

Generally, when people read this sentence, they first analyze “the water” as being the object of “drank”. Accordingly, they assume that the interpretation of the initial portion of the sentence is that “Bill drank the water”.

However, once people reach the word “proved”, they realize that the initial interpretation of the sentence doesn’t make sense (because there would be no subject for “proved”). This leads them to reanalyze the sentence, so that “after Bill drank” became an adjunct of “the water proved to be poisoned”.

Most of this linguistic processing is performed at a subconscious level. That is, while you will generally notice that you got stuck while reading a certain sentence, you often won’t be consciously aware of what the issue is, or of how your brain eventually managed to fix the issue, by reanalyzing the sentence in order to provide you with an appropriate interpretation.

Note: garden path sentences derive their name from the saying “to lead someone down the garden path”, which means to mislead or deceive someone.

As noted above, when you encounter a garden path sentence, your brain generally reanalyzes the sentence as soon as you reach the part where its initial interpretation is proven to be ungrammatical, in order to help you identify its correct interpretation.

However, in some cases, your brain sometimes goes further in an attempt to resolve garden-path ambiguities, and performs something called good-enough parsing. When this happens, your brain intentionally misinterprets the text, in a way that causes you to select the initial, incorrect interpretation for the sentence, without consciously noticing that this interpretation is ungrammatical. This subconscious process saves you the trouble of getting stuck while trying to interpret the sentence, at the cost of causing you to misunderstand it.

This is because, when we talk, we generally use language in a way that makes garden path interpretations unlikely. A notable way in which we do this is by including relevant prosodic information, which has to do with the intonation and rhythmic patterns of our speech. This includes, for example, the presence of pauses in places that coincide with syntactic boundaries, in such a way that these prosodic cues can help listeners identify the correct interpretation for the sentence, before they encounter the disambiguating lexical information that confuses them.

There are many different types of garden path sentences, as we can see in the following examples:

Other examples of garden-path sentences include the following:

Identifying and fixing garden path sentences in your writing

Because garden path sentences are so difficult for readers to process, it’s important to avoid them in your writing.

How to identify garden path sentences

Identifying garden path sentences is an intuitive process. Essentially, as you read through the text, try to find places where you get stuck when interpreting a sentence, because you find yourself having to “restart” the processing halfway through. Then, read carefully through it to see if it seems like the “restart” occurs as a result of an initial syntactic ambiguity, as described above.

If it does, then you likely have a garden path sentence, and the next section will show you a few simple ways to resolve the ambiguity. If it doesn’t, you should likely still modify the sentence, since getting stuck is generally indicative of a problem in the phrasing of the text. However, in the latter case, the solutions suggested below might not help, as they’re meant primarily to solve ambiguities that lead to garden path sentences.

Note: it can sometimes be difficult to find problematic phrasing in your writing, since, as we saw above, our brain sometimes conducts a sort of “autocorrect” process that hides errors from you, especially if you’re highly familiar with the text already. As such, if you feel that you need extra tips on how to proofread your texts effectively, read this guide.

How to fix garden path sentences

There are a few simple ways to do this, which will work in the majority of cases, and which will save you the trouble of having to completely rephrase the sentence.

First, you can add a comma in an appropriate location. For example, instead of:

Without her contributions would be impossible.

Without her, contributions would be impossible.

You can also add a complementizer in an appropriate location. Complementizers are words such as which, that, or who, that are used in order to introduce an embedded clause within a sentence. For example, instead of:

I convinced her children are noisy.

I convinced her that children are noisy.

Sometimes you will also need to include further minor modifications, such as adding an auxiliary verb (e.g. was). For examples, instead of:

The horse raced past the barn fell.

The horse which was raced past the barn fell.