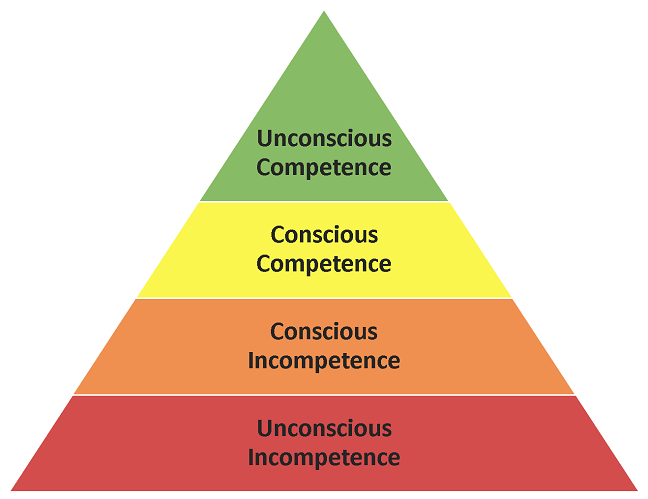 As such, in the following article you will learn more about the stages of learning model, see what each level of competence in this model entails, and understand how you can implement this knowledge in practice.

The stages of learning and levels of competence

Research on the topic of human learning identifies four main stages of learning during the acquisition of skills, each of which represents a different level in the hierarchy of competence:

These stages are often mentioned in various discussions of learning theory, as it relates to various topics, ranging from sports, to music, to language learning, and so on.

Accounting for the stages of learning

The main benefit of understanding the concept of the stages of learning is that it gives you a better understanding of how your learning process works when you’re acquiring a new skill. This is valuable, because it can help you identify the stage that you’re at, which will allow you to figure out what your biggest weaknesses are, and where you need to improve, without feeling discouraged.

In the sections below, you will read about a few specific areas where you can implement your understanding of this learning theory, together with a few additional pieces of advice which will help you implement this knowledge as effectively as possible.

Understand why the beginning is so hard

As we saw earlier, the first stage of learning a new skill is the unconscious incompetence stage, where you essentially have no idea what you’re doing, or what you need to focus on. While this stage is inherently frustrating, it’s also a completely natural part of the learning process.

It’s important to understand this, since a lot of people assume that the fact that they struggle at first means that they have no chance of successfully learning the new skill that they want to get better at. By realizing that this initial struggle is perfectly natural, you should be able to stay motivated, and keep working until you manage to successfully improve your abilities.

Understand why you sometimes feel like you’re getting worse

Sometimes, when you practice a skill that you’re trying to improve, you might feel like you’re actually getting worse over time, instead of better. A common reason why this happens is that you’ve advanced from the first stage of learning, unconscious incompetence, to the second stage, conscious incompetence.

This means that you might start feeling like you’re suddenly making a lot of mistakes. In reality, however, you were likely already making those same mistakes beforehand. The difference is that you’re now good enough to actually realize when you’re making those mistakes, whereas earlier you simply didn’t have the necessary proficiency which is required in order to be able to notice it.

Note that there are other reasons why, as your proficiency improves, you might feel like you’re getting worse, such as the fact that the more you know, the more factors you have to consider.

For example, if you are playing a sport where at first you only have to think about your offensive abilities, then advancing to a stage where you also have to start taking defense into account is likely going to reduce your overall performance in the short term, since you’re now paying attention to a lot more things at the same time.

While this might make you feel like you’re getting worse, since your performance on specific tasks is going to be worse in the short term, in reality this change in performance signifies your growing competence, and your newfound ability to understand the skill on a deeper level.

Different subskills can be at different levels of competence

When you’re developing a skill, it’s perfectly natural for the different subskills that it contains to be at different stages, in terms of competence.

For example, if you’re learning a new language, it’s possible that your reading will be at a higher level than your writing, or that you’ll be better at understanding what people are saying compared to saying those things yourself.

This variability is something that you should normally expect to see it in your learning process. If you notice that this happening, don’t let it frustrate you, and simply keep working on your weaker subskills until you get them up to the level that you want them to be at.

Give people feedback based on their stage of learning

Understanding the stages of learning can also help you give more effective feedback to other people when you’re trying to help them learn a new skill, because it allows you to tailor your feedback to their proficiency level.

Specifically, people at different levels of competence are going to benefit more from different types of feedback.

For example, during the earlier stages of acquisition people are generally less capable of handling large amounts of feedback, or feedback that is too complex, because they simply don’t have the necessary abilities in order to deal with such feedback. Conversely, at the higher levels of competence, people are often going to want to get specific technical details, that will help them build upon the basic skills that they have already acquired.

Overall, there isn’t a single method for giving feedback that will apply to everyone. Rather, the important thing is to assess people’s proficiency level, and to take it into account when giving them feedback, so that they can receive the feedback that will benefit them the most.

Final words on the stages of learning

The psychological model of learning that you saw here is meant to give you a rough idea of the stages that people go through as they learn a skill. You can benefit from understanding this model in various ways, such as by being able to figure out where you are in the learning process and what you can do to improve.

The most important thing to remember from this model is that feeling like you have no idea what you’re doing in the beginning is perfectly fine. When you eventually start realizing that you’re making tons of mistakes, that’s not a bad thing either. Instead, these are both predictable and necessary stages of learning, that you go through as you slowly improve your abilities.

How you become more competent

You become more competent at your target skill by practicing and engaging with relevant material. For example, this could involve reading about the skill, practicing it, or teaching parts of it to others.

However, the basic principle is the same regardless of what your target skill is: if you want to become more proficient, you have to practice and learn, whether your target skill is a sport, such as basketball or dancing, an art, such as drawing or playing the guitar, or something else entirely, such as writing or sewing.

Note that some factors will affect the degree to which the learning process will cause you to improve your competence. These factors include your natural abilities, the amount of time and effort that you put into learning, and the optimization of your learning process.

Since you can’t control your natural abilities, if you want to become more competent at a skill you will have to focus on making sure that you put in enough time and effort, while also optimizing your learning process as much as possible. This optimization can involve, for example, using learning techniques such as interleaving or knowledge-building, which allow you to learn and practice your skills more effectively.

The potential fifth level of competence

In general, this stage of learning is less clearly defined than the other stages, and is less commonly referenced in the research literature on the topic.

However, the possible distinction between this stage and the fourth one isn’t crucial for most people learning a skill, since this stage signifies the highest level of competence possible, and as such applies only to relatively few people, who are already strongly familiar with the skill that they are learning.

The history of the stages of learning

This theory of learning is attributed to different people in the various sources that mention it. Some studies attribute it to Abraham Maslow, who developed the hierarchy of needs, while other studies attribute it to various other people, the most notable of which is William S. Howell, whose 1982 book is cited as a resource in a large number of research papers on the topic.

One possibility for why the source of this theory is unclear, is that several people came up with similar conceptualizations of this model independently from one another, around the same time. Nevertheless, the question of who came up with this model first is not crucial for most people, as it doesn’t have any effect on how the theory is applied today.