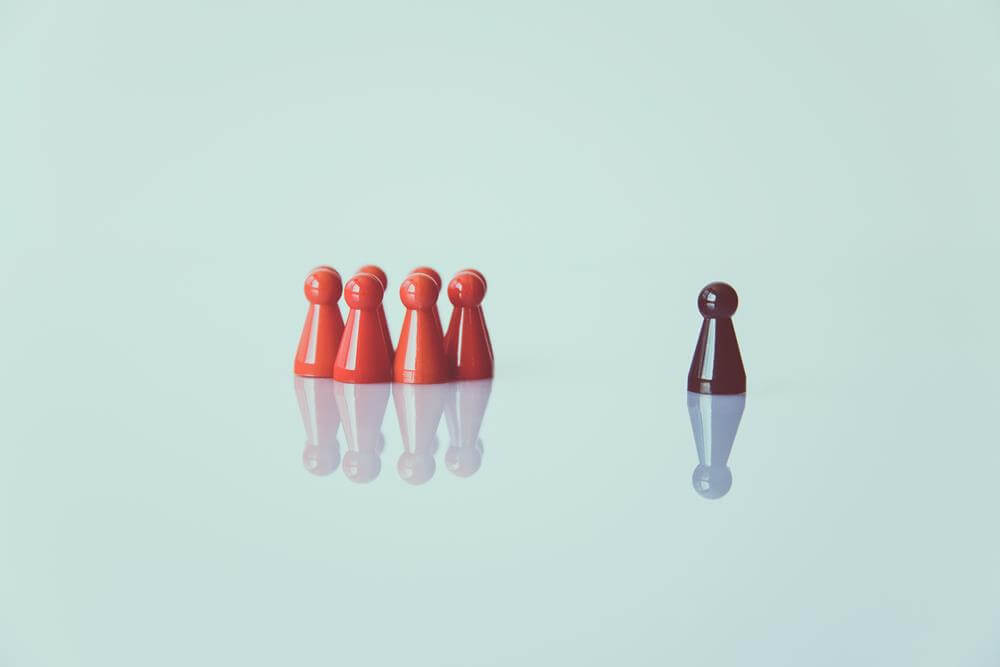 An ingroup is a social group that a person identifies as being a part of, based on factors like nationality, race, religion, socioeconomic status, or political affiliation.

An outgroup is a social group that a person does not identify with, based on similar factors as would cause that person to identify with an ingroup (e.g., nationality and religion).

The concept of ingroups and outgroups has important implications in a wide range of contexts, so it’s important to understand it. As such, in the following article you will learn more about this aspect of social identity, understand the psychology behind it, and see what you can do to account for it in practice.

Examples of ingroups and outgroups

Many other examples of ingroups and outgroups exist, as people can develop their social identity based on various criteria, such as nationality, ethnicity, race, age, language, socioeconomic status (or social class), and occupation. The following are specific examples of ways people categorize their ingroups and outgroups, which also illustrate how this type of social identity can influence people’s thoughts and actions:

Accordingly, the concept of ingroups and outgroups is associated with various common phenomena, including racism, sexism, nationalism, patriotism, tribalism, collective narcissism, groupthink, and a polarized “us vs. them” mentality.

In addition, given the wide range of criteria that people can use when distinguishing between ingroups and outgroups, there is a huge number of ingroups and outgroups that a person can reasonably identify. Some of these groups will be more important to them than others, though which are more important can vary under different circumstances, for example if the question of membership in a certain group is particularly salient in a certain situation.

People’s tendency to consider ingroups and outgroups is such an innate and powerful impulse that they can be made to identify with a new minimal ingroup based on entirely random, arbitrary, and meaningless criteria. Essentially, the simple act of being told that they’re part of a group can make people identify with it socially, even if the group members have nothing else in common.

Psychology of ingroups and outgroups

A key framework that’s used to explain why and how people distinguish between ingroups and outgroups is social identity theory, which explains this phenomenon as follows:

“We can conceptualize a group… as a collection of individuals who perceive themselves to be members of the same social category, share some emotional involvement in this common definition of themselves, and achieve some degree of social consensus about the evaluation of their group and of their membership of it…

Social groups… provide their members with an identification of themselves in social terms. These identifications are to a very large extent relational and comparative: they define the individual as similar to or different from, as ‘better’ or ‘worse’ than, members of other groups…

It is in a strictly limited sense, arising from these considerations, that we use the term social identity. It consists… of those aspects of an individual’s self-image that derive from the social categories to which he perceives himself as belonging. With this limited concept of social identity in mind, our argument is based on the following general assumptions:

From these assumptions, some related theoretical principles can be derived:

The basic hypothesis, then, is that pressures to evaluate one’s own group positively through in-group/out-group comparisons lead social groups to attempt to differentiate themselves from each other…”

— From “An integrative theory of intergroup conflict” (Tajfel & Turner, 1979)

Other theoretical frameworks have also been proposed to explain the concepts of ingroups and outgroups, including optimal distinctiveness theory, subjective uncertainty reduction theory, and social dominance theory.

Furthermore, various explanations have been proposed for specific phenomena that are associated with the distinction between ingroups and outgroups. For example:

Note: Just because someone views a certain group of people as being in their ingroup, doesn’t necessarily mean that these people also identify with this ingroup, or consider this person to be a part of it.

When it comes to how people categorize ingroups and outgroups, there is an important distinction between affirmational and negational categorization:

The concept of superordinate groups and subgroups is important when it comes to how people view ingroups and outgroups. As one paper notes:

“From the perspective of the ingroup projection model, the evaluation of intergroup differences depends, first, on whether the ingroup and outgroup are perceived to be included in a shared superordinate category.

If not, there is no expectation that the outgroup comply with the same norms or values as the ingroup. The outgroup’s difference is not identity threatening and can be observed in a neutral or even interested way, as something irrelevant or perhaps exotic.

Social identity can be fluid, rather than stable, meaning that it can change based on factors like the environment a person is in. For example, while a supporter of an opposing sports team might be construed as an outgroup member in some situations, the same person might be recategorized as an ingroup member in other situations, such as when the salient social identity is the superordinate category of “sports fan”.

Accounting for ingroups and outgroups

Accounting for the concept of ingroups and outgroups can be useful in various situations, such as when you want to understand and predict people’s behavior, including your own. For example, this can help you understand why some people apply double standards by criticizing members of their outgroups for behaviors that they fully tolerate among members of their ingroup.

When accounting for ingroups and outgroups in this manner, there are various factors that you can consider in any given situation, including:

People often treat others differently based on whether they are members of their ingroup or outgroup, a phenomenon referred to as the intergroup bias (or the ingroup-outgroup bias).

There are two main ways in which the intergroup bias manifests:

The intergroup bias can also manifest in various other ways. For example, the linguistic intergroup bias means that people tend to encode and communicate positive ingroup and negative outgroup behaviors more abstractly than they do negative ingroup and positive outgroup behaviors. Similarly, the outgroup homogeneity effect, can lead the outgroup to be viewed as being more homogeneous than it is or than the ingroup is, and this effect is associated with various cognitive and behavioral patterns, such as generalizing or stereotyping outgroup members (though an ingroup homogeneity effect can also occur in some cases). Moreover, people generally have an easier time communicating with people in their ingroup than with people in their outgroup.

These various can co-occur and influence one another, but this doesn’t always happen. For example, it’s possible for intergroup discrimination to occur due to ingroup favoritism, even in the absence of outgroup antagonism.

In addition, various moderating factors can influence the intergroup bias, for example when it comes to the way in which it manifests. Such factors include, for example, intergroup competition, intergroup similarity, ingroup essentialism, cultural background (e.g. individualistic or collectivist), and the age and self-esteem of group members.

Overall, the intergroup bias leads people to treat their ingroup and outgroup differently, for example by favoring things that are associated with their ingroup and devaluing those that are associated with their outgroup. This bias can take many forms, and various factors, like intergroup competition, can influence the likelihood that people will display it, as well as the way in which they do so.

How to reduce intergroup bias

To reduce the intergroup bias, you can use various combinations of the following techniques:

When deciding which techniques to use and how to use them, you should consider both personal and situational factors that pertain to the situation, like:

Overall, you can reduce the intergroup bias in various ways, including increasing awareness of the issue, creating shared group identity, identifying positive things about the outgroup and negative things about the ingroup, empathizing with outgroup members, and increasing contact between group members. When deciding which techniques to use and how to use them, you should consider relevant personal and situational factors, like who are the people involved and what kind of intergroup bias they’re displaying.