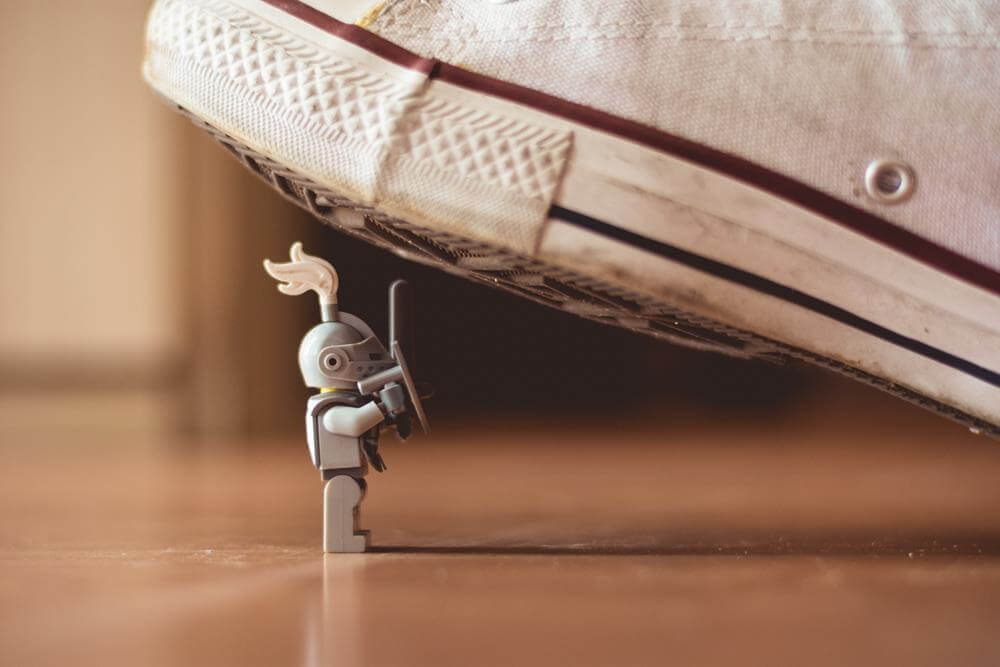 Chutzpah is the willingness to take risks in a highly shameless and confident manner, that’s often seen as disrespectful or rude.

For example, an entrepreneur who’s running a small startup might display chutzpah by calling the CEO of a large company directly, despite having no invitation to do so.

Chutzpah can be beneficial in some cases but detrimental in others, which makes it a potentially useful but also dangerous trait. As such, in the following article you will learn more about chutzpah, and see how you can take advantage of it properly yourself, as well as how you can respond to displays of chutzpah by others.

One example of chutzpah is a person who goes to a job interview and says “I don’t have any of the necessary qualifications, but you should hire me anyway, because I’m smart and I’ll find a way to do the job better than any of the other candidates”.

Another example of chutzpah, which appears in the Indian film Haider, is a bank robber who steals money from the bank and then asks the bank to open an account so he can deposit the stolen money.

Similarly, another example of chutzpah is attributed to author Guy Kawasaki, who is reported to have said that chutzpah means “calling up tech support to report a bug in your pirated software”.

In addition, the book “The Joys of Yiddish” describes the following classic—but extreme—example of chutzpah:

“Chutzpa is that quality enshrined in a man who, having killed his mother and father, throws himself on the mercy of the court because he is an orphan.”

The book also describes the following example of chutzpah:

“A chutzpanik may be defined as the man who shouts ‘Help! Help!’ while beating you up.”

Furthermore, there are many other examples of chutzpah in the context of law, as evident, for instance, in a 1993 study, which found that the word “chutzpah” has appeared in more than 100 reported cases. The first such case appeared in 1972 at the Court of Appeals of Georgia, where the word was used to describe someone who broke into a sheriff’s office in order to steal guns.

The 1993 study also describes the following joke in order to illustrate the concept of chutzpah:

A man goes to a lawyer and asks: “How much do you charge for legal advice?”

“A thousand dollars for three questions.”

“Wow! Isn’t that kind of expensive?”

“Yes, it is. What’s your third question?”

Two additional examples of chutzpah in the legal domain appear in the book “Chutzpah”, by American lawyer and legal scholar Alan Dershowitz:

“The classic illustration [of chutzpah]… has been supplemented in my own experiences: A client convicted of selling false antiques who tries to pay me in — you guessed it — antiques. The woman whose criminal case I won but who sued me for malpractice because she was unable to continue to defraud the government.”

However, while many of the above examples are relatively negative, there are also more positive examples of chutzpah, and this term is often used with positive connotations.

For example, in the context of language learning, linguistic chutzpah can help learners act confidently and use the new language that they’re learning, instead of giving in to anxiety or concerns that they’ll use it wrong, particularly in the face of potential criticism.

Similarly, one person told the following story, where the use of chutzpah was met with an overall positive response:

“I was a no-name, first-time author who was self-publishing, so conventional wisdom suggested I didn’t stand a chance of getting a prize quote from the best-selling author and former chief evangelist for Apple. Despite [him] initially declining my request, I shamelessly pursued him until he agreed—’Because I really admire your chutzpah!’ he said.”

Chutzpah, as a trait, carries both positive and negative connotations. As one paper states:

— From “The Evolution of Chutzpah as a Legal Term: The Chutzpah Championship, Chutzpah Award, Chutzpah Doctrine, and Now, The Supreme Court” (Guggenheim, 1998)

This is supported by research on the topic, which suggests that there are both positive and negative aspects of chutzpah:

“Indeed, the word chutzpah has both a positive and a negative connotation.

To the perpetrator of chutzpah it means boldness, assertiveness, a willingness to demand what is due, to defy tradition, to challenge authority, to raise eyebrows.

To the victim of chutzpah, it means unmitigated gall, nerve, uppityness, arrogance, hypocritical demanding. It is truly in the eye of the beholder.”

The benefits and dangers of chutzpah

The main benefit of chutzpah is that it can push you to take good risks, in situations where you wouldn’t otherwise. For example, this can involve reaching out to the CEO of a large company as a fresh entrepreneur, in order to get a deal that you wouldn’t be able to get otherwise, even though doing this may be unconventional.

As one author says when describing what he calls applied chutzpah:

“…[it is] a willingness to step forward into audacious action even though one may have no idea how one will either pull it off, or where it will ultimately lead. The only real knowing at the moment of Applied Chutzpah is an intuition that if some audacious action were not initiated, nothing would get done.”

Conversely, the main danger of chutzpah is that it can cause you to take bad risks or act in a way that has adverse outcomes. For example, this can involve being too pushy with an important executive in the middle of an event that they’re in charge of, to the point where you get kicked out.

In addition, another notable danger of chutzpah is that it can cause you to waste resources, such as your time and energy, on pointless attempts that have are likely to fail, in situations where you can spend those resources in a more productive way.

How to use chutzpah

Because chutzpah can lead to various issues, especially when used incorrectly, before using chutzpah you should first assess the situation and consider the following:

When deciding in what way to use chutzpah, you should focus as much as possible on the positive aspects of chutzpah (being confident, daring, and brazen), and avoid its negative aspects (violating norms and overstepping boundaries).

Furthermore, if the analysis makes it clear or likely that chutzpah isn’t the best course of action in a certain situation, for example because it’s high-risk and low-reward, then you should avoid it, and choose an alternative course of action instead.

In addition, to ensure that you’re making the best possible choice regarding if and how to use chutzpah, you can use various debiasing techniques, which will help you assess the situation in a rational manner. For example, you can use psychological self-distancing, by visualizing what your planned chutzpah will look like from the perspective of other people, or you can ask for feedback on your planned chutzpah from someone whose opinion you trust.

Finally, when considering the use of chutzpah, it can also be beneficial to consider relevant moral principles, which can help to further guide your actions, especially in situations where a certain display of chutzpah could be beneficial but morally wrong. When doing this, one notable principle that you can use is the golden rule, which denotes that you should treat others the same way you would like to be treated yourself.

Overall, to determine if and how to use chutzpah, you should consider your goals, the potential benefits and risks, the circumstances and people involved, and the different ways in which you can display chutzpah. If necessary, you can also use relevant debiasing techniques, such as psychological self-distancing, as well as relevant moral principles, such as the golden rule, in order to help yourself act in the best way possible.

How to respond to chutzpah

There is no single right way to respond to chutzpah that someone else is displaying, since the preferred course of action depends on various factors, such as who is displaying the chutzpah, toward whom, and under what circumstances, as well as on how you view this kind of behavior and what you hope to achieve by reacting to it.

Nevertheless, there are some useful things to keep in mind when responding to people’s chutzpah:

The origin and etymology of ‘chutzpah’

“Chutzpah is a concept more easily demonstrated than defined… We immediately recognize a chutzpahnik — a person manifesting the quality of chutzpah — when we observe him or her in action, despite the inadequacy of single-word definitions.”

According to the Oxford English Dictionary, the English word chutzpah is derived from the Yiddish khutspe, which means “impertinence, impudence, insolence, audacity”. This word, in turn, is derived from the Aramaic ḥuṣpā, which has a similar meaning, and which comes from the Aramaic ḥaṣap, meaning “to be insolent or impudent”. In addition, the later Aramaic word (ḥuṣpā) is also the word from which ḥuṣpāh was derived into post-biblical Hebrew.

In modern Hebrew, this word is written as חוצפה, has a similar pronunciation as in English (with some differences), and is often used with negative connotations, to refer to rudeness.

The word “chutzpah” in its modern sense originated with the Jewish community in the US, though it has since reached widespread use among other communities. The first recorded use of this word in its modern sense in English writing appeared, according to the Oxford English Dictionary, in 1886, in the October 15th edition of American Hebrew, where it was stated that “Our coreligionist, on his arrival on board ship, is already manifesting the first signs of American patented ‘Hutzpe’.”.

In addition, the Oxford English Dictionary suggests that there are also slightly earlier uses of the word in the sense of referring to an act of impudence or impertinence. For example, this includes an 1853 poster featured in the 1953 book “Pictorial History of the Jewish People”, which states “No Chootspers Allowed.”. However, the exact meaning of “chootspers” in the quote is uncertain, since the term could refer to impudent people or to impudent acts. A quote whose meaning is clearer appears in an 1875 article in the June issue of “Young Israel” magazine, where author A. Funk wrote “‘What a Hutzpe,’ thought Cuppel, ‘to call me son; I could be his father.’”.

Furthermore, the adjective chutzpadik was derived from the noun chutzpah, and is used to refer to people who display chutzpah. The earliest recorded use of the term in written English is attributed to an article published in an October 1959 issue of the “Jewish Frontier”, which states that “Mature kibbutz children are in fact less chutzpadik, more settled and less concerned with foreign travel, and in general less spoilt than town sabras.”.